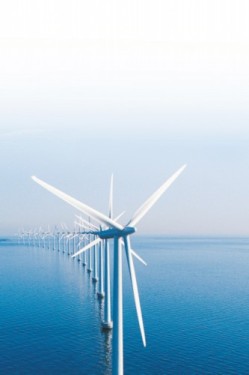 The North Sea looks like a huge treasure house and has been an important source of European energy supplies since the 1960s. In particular, the United Kingdom and Norway also regard the North Sea as an important oil and gas reserve. However, in recent years, as the demand continues to grow, more and more people are beginning to worry about how long the North Sea oil and gas resources can support. At the same time, offshore wind energy development as a new face has begun to emerge in the North Sea.

In 2008, the British government announced that it plans to develop the sea areas around the UK; it also proposed to achieve 33 GW of offshore wind power by 2020. Utilities companies in the UK are also gearing up and investing heavily in the development of licenses and related equipment and components.

For example, Gillespie stated that the development of offshore wind power needs to find the best way to install submarine cables and other facilities, and the offshore oil and gas development industry has already solved this technical problem. â€œAs long as the two industries strengthen communication, they will benefit together. This is also a great opportunity for oil and gas companies to understand the potential of offshore renewable energy development,â€ he said. Gillespieâ€™s hopes have not been frustrated. There have been some senior oil service companies, and they have seen opportunities brought about by the development of offshore wind power.

It is understood that Subsea7, a British oil service company, established the offshore renewable energy sector in early 2011, which is responsible for providing related offshore operations technology to Scottish Energy Corporation and Southern Scotland Energy Corporation to help the two companies build offshore wind farms. Another company, Petrofac Oil & Gas, acquired TNEI, a British renewable energy engineering consultancy company, and Technip, a French oil service company, in 2010. According to Stefan Siss, Vice President of Biofuels and Renewable Energy at Technip, the company had previously participated in the Norwegian national oil company's Hywind offshore wind project. Since then, the company has realized that it can use its original technology to enter the sea. Wind power is a brand new market. It is understood that the company has also participated in another floating offshore wind power project in France; the company also cooperated with the Swedish Falls Energy Company and the Aberdeen Renewable Energy Group to build the Aberdeen European Offshore Wind Development Center, which is expected to be installed. About 11 offshore wind turbines.

Cis said that for offshore oil service companies, many of the technologies needed to participate in and develop offshore wind power business are very familiar. "Wind farms need to install a lot of internal cables, and this is precisely what we do almost every day." For example, he said, "The cable used for wind farm transmission is also very similar to the cable used for communication and transmission in offshore oil fields."

However, Sith also admitted that it will take some time for offshore oil service companies to shift to offshore wind power business, especially in infrastructure construction. â€œThe operation of offshore oil and gas development is very complicated.â€ He said, â€œDeveloping offshore wind power requires the installation of a fan base and the assembly of the wind turbine itself. The equipment that needs to be installed is much more special and requires detailed planning of the entire work process.â€

Although there are certain difficulties in development, many offshore oil service companies, like the above two companies, have actively entered the field of offshore wind power development. The British SeaEnergy company is a typical example. In 2009, the UK oil and gas development company Ramco Energy Corporation reorganized and changed its name to SeaEnergy and began to participate in offshore wind development in the UK. At the same time, the company does not have a stake in the oil and gas business. The companyâ€™s management stated that it hopes to become a cross-sector company with oil and gas and offshore wind business in the future.


The origin of the fireplace can be traced back to the time when mankind has just moved into the cave when using the "fire pond" lighting, heating, barbecue food. With the development of productive forces, lighting, heating, barbecue food these three functions gradually evolved and separated.
Fireplaces become dedicated heating equipment: the development of the times, to the fireplace has brought new changes. Morphologically speaking, the fireplace from the traditional firewood fireplace, gas fireplace, charcoal fireplace, etc., and then derived a new category: electric fireplace.
Electric fireplace is a reference to the European classical fireplace production process and modern acoustics principle, so that the traditional fireplace in the design has been greatly improved, in the elegant yet created a green and more bruised real wood burning effect.