One is a world-renowned computer company, one was once the world's fourth-largest flat-panel display manufacturer. The United States did not think of Apple Inc., which would create a dispute with the other side of the ocean for Proview Technology (Shenzhen) Co., Ltd. to produce iPad trademark rights. .

At present, Apple's iPad is sold in the Mainland, and it encounters the "å°´å°¬" that may infringe on Shenzhen Proview's iPad trademark.

Now that debt is high, the Shenzhen Proview Technology Co., Ltd., which is on the verge of collapse, is left with iPad, the most valuable â€œtrademarkâ€. It can be obtained at the final hearing of the â€œiPadâ€ trademark right dispute held at the Guangdong High Court on the 29th of this month. With the opportunity of "rebirth", the world's attention is focused.

Yesterday morning, the reporter drove to the Shatoujiao Free Trade Zone in Yantian District, Shenzhen. If it was not under the guidance of security personnel, it was hard for the reporter to imagine that the old factory building that was â€œscratchedâ€ was the fourth largest flat panel display manufacturer in the world. Crown Technology (Shenzhen) Co., Ltd.

The old factory building is "destroyed."

A well-known trademark seems to be on the verge of closure of Shenzhen Proview has the last "life-saving straw" - the well-known "iPad" trademark.

The earliest signing of the "iPad" trademark was not the creation of the American Apple Inc., a popular IPAD product, but the unfamiliar Shenzhen Proview.

In December 2011, Apple and Proview Technologyâ€™s "iPad" trademark rights dispute was temporarily suspended by Apple in the first trial. The final case of the case will be held in the High Court of Guangdong on the 29th of this month.

"If Apple loses, it means that it may lose the iPad trademark rights in mainland China." Zhang Jian, a practicing attorney of Dacheng Law Firm Shenzhen Office, told reporters. "And for Shenzhen Proview, it may be a The chance of rejuvenation."

After the news came out:

Creditors have come to negotiate debt collection According to the Proview announcement, their net current liabilities amounted to 2.87 billion yuan, and loans of 3.8 billion yuan were overdue. The debt to eight banks such as the Bank of China was approximately US$180 million, or approximately RMB1.145 billion.

"The money owed to the bank, the money owed to the supplier, and the wages owed to the workers. As far as I know, Proview owes a bond of ass." A staff member in the bonded area said, "Many recent creditors have heard of Proview. After Apple's trademark rights struggle to win the case in the first instance, they have come back for debt again.â€

Lawyers said: The spirit of the rights protection of Weiguan is worth affirming:

According to Jin Yan, a lawyer of Guangdong Eastern Jinyuan Law Firm, Appleâ€™s efforts to acquire the "iPad" trademark "have been painstaking."

â€œAppleâ€™s intellectual property strategy is correct. It is to use a shell company called IP in the UK to come forward to purchase the IPAD logo, so that Apple can buy it â€œcheapâ€. The abacus is a wishful one, but the legal procedures are flawed. Apple did not realize that the ownership of the Continental iPad trademark was not in Taipei's Proview, but in the hands of Shenzhen Proview. Ultimately it was hard to imagine that Apple would make such an inferior mistake."

The bank is the "hands behind the scenes"

Some netizens pointed out that Proview's appetite is too big. In this regard, Zhang Jian, a lawyer of Shenzhen Dacheng Law Firm's Shenzhen office, believes that Shenzhen Proview's lawsuit is understandable from the law. "It's not easy to say whether or not 10 billion yuan is excessive, but Proview's awareness of trademark rights and the spirit of courage to defend human rights are worth learning by mainland companies."

Zhang Jian reminded, "It is worth noting that due to Proview's reorganization of assets, it is the eight creditor banks that have benefited from obtaining debt rights and borrowed Proview to jointly claim 10 billion yuan from Apple."

Xiao Caiyuan, a lawyer who has never closed the consultation channel, admits that they never closed down the channels for mutual negotiation. However, "Apple is not sincere, has repeatedly delayed time, 'circling the core issues' on the core issues. Apple's highest level is now aware of the error and hopes to find a step through a low-cost way to hinder and delay the progress of the case."

Once the worldâ€™s fourth-largest flat-panel display manufacturer, â€œthe person in charge was no longer here, and the workers were gone.â€ An uncle under construction shook his head. â€œThis factory was formerly a well-known enterprise in the bonded area. After a few years of work, it was all gone...â€

A security guard who worked in the Sha Tau Kok Free Trade Zone for four years also told reporters: â€œIn the past, the factory was very prosperous. There were more than 5,000 workers and the treatment was very good. There were also own stocks. From 2010, the factory will No recruits were hired, and the old employees were withdrawn in batches. At that time, we knew that the factory's business had a problem."

The reporter saw from the information released in the bonded area that Proview Technology (Shenzhen) Co., Ltd. is the largest and most important R&D and production base of the Proview Group. The company settled in Shenzhen in 1991 and entered the Sha Tau Kok Free Trade Zone in 1994. It employs more than 5,000 people. It is one of the top 100 high-tech enterprises in Shenzhen and one of China's foreign trade exports.

"Shenzhen Proview has indeed enjoyed a glorious past. It was once the world's fourth-largest flat-panel display manufacturer. However, it is now heavily indebted, and it has little valuable assets," a staff member of the Free Trade Zone told reporters.

Thimble Clevis is used to connect the preformed tension clamp to the tower with other link fittings,like ball eye,Shackle U. The thimble clevises are normally made by stainless, carbon steel, cast iron with hot-dip galvanized. The Thimble Clevis For Cable Fitting: Hot galvanized steel. There are five types of failure loads: 20KN.50KN.70KN.100KN.120KN. 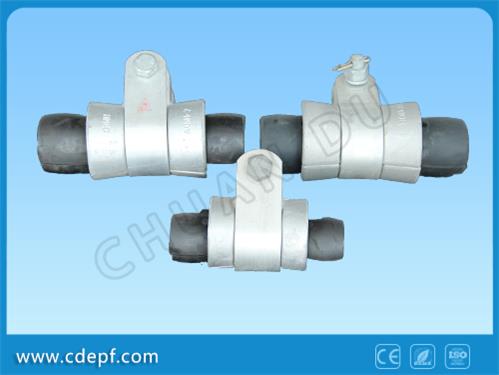